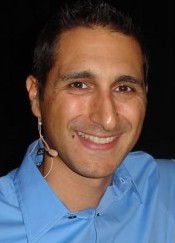 [fimage] David DeAngelo is the founder of the company “Double Your Dating”. His real name is Eben Pagan. The company provides dating services including couching. David DeAngelo is seen by many in the industry as among the leader in providing dating services. His invitation to countless interviews both in radio and television is a testimony to this. Furthermore, David has been given prominence in other media publishing’s including magazines, newspapers and articles. His daily dating newsletters have reached one million subscribers. Considering all these factors, DeAngelo is considered the largest operator in the dating industry today.

We have mentioned before that David DeAngelo is the commercial name of the business, which started in the year 2001 under the name Sisonpyh. Eben Pagan was born on December 05, 1971 in New York City, United States. He started his career in the real estate industry as an agent. He worked in seminars and furthered his studies by training in business for entrepreneurship and sales. This is the time he started studied dating.

Eben Pagan is a family man, married August 2011 to Annie Lalla and lives in Santa Monica.

Eben has kept his dating life private up to now but has revealed his girlfriends’ experiences in his DVD programs. Over the years, he has been seen with very few women. In the year 2010, he appeared publicly at Burning Man with his then girlfriend Annie Lalla, who is now his wife. She is also a dating and relationship coach. They were married in August 2011.

The concepts developed by David and applied to the two genders are highly innovative and strongly based on human’s social, sexual and personal behavior. The fact that he starts his seek by pointing first that attraction is not a choice, shows other aspects, which are more important in establishing a good session of communication, aspects like humor, intelligence, the independence of the man, the confidence each is prone to give to the other, once he receives signals that they can trust the person next to him.

The other innovative and quite interesting concepts David follows are based on the inner Wuss, the counter intuitive behavior, the sexual communication, the life’s changes and emulation of the successfulness.

The most notable concept seems to be the “cocky and funny” one. This concept relies on the “cocky” side a man should have in trying to conquer a woman, and the “funny” attitude a woman needs in order to attract the views and find an interlocutor to chat with.

The most interesting personal quotations David DeAngelo says when tries to match a couple are the followings:

“I do not apologize for my desires as a man.” It is known the basic sexual instinct every human has inside him, and men are those more prone to let it out when a female gives signals of interest.

“You cannot convince a woman to like you.” This is more connected to the selective behavior women possess. They tend to be more criticizing and more attentive when selecting the possible partner.

“Don’t be her girlfriend.” This seems to be, by far, the most interesting and important quote and rule, as well. A woman doesn’t want a good female friend next to her. Her date partner must be strong, protective and sensible enough to understand her. A woman will never appreciate a high feminine attitude from her boyfriend.
Based on these concepts and personal quotes, Double Your Dating is the company with the fastest growth on the online community. The angel from the “DeAngelo” always supervises and finds what’s right.