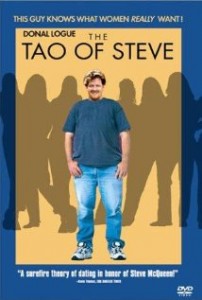 The Tao of Steve on IMDb

The Tao of Steve is about a fat guy, Dex who lays a lot of woman, which are out of his league. He is very charismatic and social but his true secret is that he lives after The Tao of Steve. If the guys name is Dex, why is it called The Tao of “Steve” ? Because: “Steve is the prototypical cool American male. Like Steve McGarrett, Steve Austin, Steve McQueen. He’s the man on his horse, the guy alone. He has his own code of honor, his own ethics, his own rules of living. He never ever tries to impress the women, but he always gets the girl.”

The Lessons of the TAO:

1. Be desireless
2. Be excellent (especially in front of her)
3. Be gone (we pursue that which retreats from us.)

“Women are on a different time table. They want sex as much as men do… but they’re ready for it about fifteen minutes later. So if you hold out for twenty, she’ll be chasing you for five.”

“Don Juan slept with thausands of woman, because he was afraid he wouldn’t be loved by one.”

“The Tao of Steve isn’t about picking up lots of women. It’s about being the best person you can be.”

“Men try and achieve success for one reason: to impress women, right? That’s the only reason they build companies, write books or compete in sports and stuff. The problem is, if you figure out how you could get laid without achieving anything then you could lose your motivation altogether. So there’s no reason to get off the couch.”

What do you look for in a woman? Dex: “Low standards”

Without my interest in Pickup I wouldn’t have watched this movies. It’s okay but in my opinion besides the knowledge about how to seduce woman not very awesome.