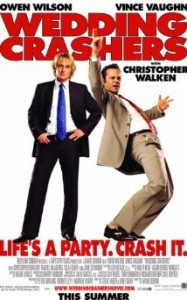 A pair of two guys, Jeremy and John, are divorce mediators and good business partners. Being old time friends, both of them have a unique springtime hobby of frequently crashing wedding parties and getting laid eventually. After a series of successful wedding crashes, both of them find themselves hung in critical situations at a high profile wedding. John unexpectedly falls for the bride’s sister Claire while Jeremy gets stuck with the other sister of the bride, a stage-five-clinger, Gloria. Both the friends endure tons of comical mishaps at the hands of the crazy members of the bride’s family, but also learn some unwelcomed lessons of true love and relationships.

The duo of Jeremy and John is totally exceptional in the art of pick up in this movie. The way they both are able to bluff their way into wedding parties through deception is a real state of the art. They follow a predefined set of rules to get in with the ladies at a wedding. Their goal is to enjoy free food and drinks at weddings and lure women down to their beds. The best part of their act is that they always have cover up stories for every sort of nasty situations. They pretend to be different characters at each marriage and finally end up in fooling everyone with their made up stories. No matter how beautiful or how smart a woman is, she is unable to escape the charm of these men. Obtaining a woman’s sympathy is the key part of their act, and once they get it done right, then there’s no stopping them.

The way these guys catch a woman’s eye with their deceptive yet effective act is totally incredible. Capturing the woman’s mind is what these guys are best at, and it is undoubtedly the important most part in the art of pickup. A very important point of their act is that they never underestimate themselves while picking up women. Even though being in their late thirties, these guys have still got plenty of game left in them. They never seem to fail at their acts, all thanks to their complete devotion to the pick up rules that they follow. Later in the movie, it is revealed that the amazing duo has a soft corner in their heart too. Both of them are courageous enough to stand up and fight for the women whom they love.