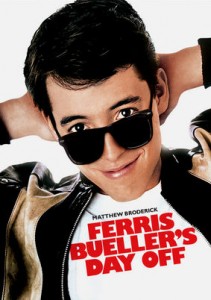 Before I talk about Ferris, I want to mention another incredible guy. I was surprised to see him this young (this movie is from 1986), because I’m a big fan of him today and I’m sure you all know him: Charlie Sheen, famous for being a Playboy in Two and a half Men. He plays a short but sensational seductive role as:

The Boy in the Police Station

Charlie embodies the bold and checky Badboy. His “I don’t give a fuck” appearance matches perfectly his role: the rebellig rocker jacket, the unconventionally remarkable but still a bit messed up (because he doesn’t care) hairstyle and on top of this he consistently holds eye-contact with this provocative look in his eyes and of course he never smiles.

Ferris – lives on his own Rules

Ferris is a young man, who sets his own rules and lives the life he wants. Having fun and enjoying every moment with his friends is his most important rule, because “Life moves pretty fast. If you don’t stop and look around once in awhile, you could miss it”. This attitude got him so much sympathy from his schoolmates that they cover his back, no matter what he does and everyone speaks very well of him. He is very smart and knows exactly how to use words and acting to manipulate people for getting exactly what he wants. No matter if Ferris tries to persuade his friend to join his plan, calming a situation down when someone got angry. But he manipulates in a positive way so that everyone (his friends) is having a good time. This only works because of his incredible strong frame and his unwavering believes in himself, his abilities and that his plans will work. Therefore no matter how bad the situation looks like, he stays optimistic, never worries and never surrenders.

Ferris is absolutely spontaneous and constantly looking for the next adventure. Because he is so sure of himself, he doesn’t rethink everything, instead he reacts after his feelings, even if it’s not always the most intelligent idea. That’s why out of the sudden he proposes to his girlfriend though they both still go to high school. It was not a joke for him, that’s his way of thinking, I love her so I want to marry her. Ferris is living in the moment, life is short overthinking is just a waste of time.