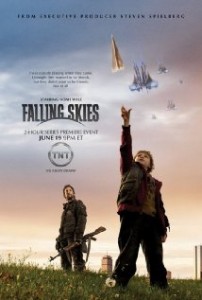 This is not only a world class series that I enjoy very much, but also one of the best about Leadership. It’s such a perfect example because the story is about how aliens invade our planet and destroy everything so the humans that survived have to manage a complete new way of living. Just like in the time of Stone Age, they have to find a fast, productive and secure form of living together.

There are the civil people who need protection, the fighters who protect and the leaders who give directions. Fortunately we have 3 leader personalities, each with a complete different character and all three of them are main characters, so you see how they act in every episode.

He is the best example of how to be a nice guy and still an alpha male. He combines only the positive traits you need to have as a leader. Tom is very caring about his children and all the other people in the group, also the bad ones. He always puts the well being of the group before his own. After Pope tried to kill him, he insists on giving him another change, instead of taking revenge, because the group needs every single fighter. Tom was afraid that the aliens could have manipulated or control him so he told the others to handcuff him so that he can’t harm the group.
He is confident about his abilities and knows that the group can profit from his knowledge and intelligence, so he makes a lot of decisions and is sure about them, this gives everyone the feeling that they can trust his lead.
Tom has a lot of empathy, this is very helpful to win the sympathy of the group and show them that he understands and values every member.
He is also a man of action, when there is not enough time to plan every detail, he takes instantly action and always fights on the front even if the mission is very dangerous.

In terms of woman the scenes are very limited, his wife is dead and the new woman in his life is doctor Anne Glass. A very beautiful, intelligent, caring and confident woman. She is the perfect match for him, they don’t flirt very much, but when they talk, you can feel the connection and chemistry. His character and behavior is so attractive that he doesn’t need to play any games or hit on her, he knows that she has feelings for him. Anne also does nothing obviously but shows her feeling in the way she cares about him… I love the clear role allocation between man (leader, fighter, protector) and woman (nursing and caring) but don’t want to reveal to much, you will see what happens when you watch it.

His military knowledge and experience are very helpful for the group the this times, this is why he was chosen to be the leader with Tom by his side. At the beginning he was very cold, rational and looks at the civil people as a burden. He doesn’t like to show his emotions, especially not his weaknesses, what makes him rock solid, but also not so sympathetic. Working together with Tom makes him a little softer so both of them benefit from each other.

He is an ex-prisoner and seems to love what happened to the world, because now he can live on his own rules and nobody can judge him. He has also good leader qualities and had his own pack who followed him in the beginning. Pope is very charismatic, intelligent and slick. His own life and well being is most important for him, much more than the group, he is ruthless and seems to love being the leader because of the power and not to help others. But sometimes he shows that he still got a good heart, for example when he rescued the kids in the house hiding from the traitors. His charm, funny and worry free attitude makes him still a very likable character.